Immunotherapy – the new hope for people with leukaemia 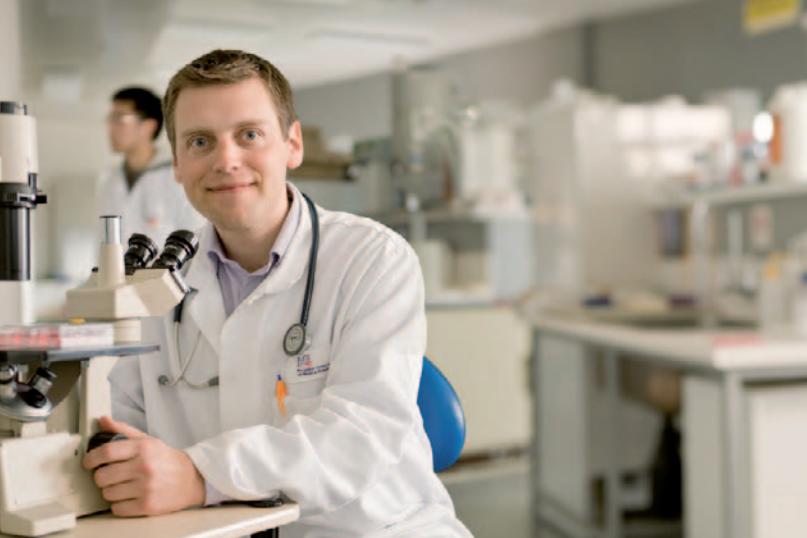 Dr Robert Weinkove is a UK-trained haematologist (blood specialist) who relocated to New Zealand in 2008. Dr Weinkove believes that to be a good doctor you need to do research.

Dr Weinkove says, “I had read about the Cancer Immunotherapy Research Group at Wellington’s Malaghan Institute. It was clear that this group is at the forefront of immunotherapy research so I made the decision to move to New Zealand. The Malaghan researchers helped me put together an excellent proposal and we were delighted to receive funding from the Cancer Research Trust.”

Dr Weinkove’s interest is in chronic lymphocytic leukaemia (CLL). CLL occurs when white blood cells called B lymphocytes divide uncontrollably. They accumulate in the blood and bone marrow and crowd out normal blood cells, impairing the ability to fight infection and often giving rise to anaemia. CLL is the most common leukaemia and the prevalence increases with age. With New Zealanders living longer CLL will become more common.

The immune system is regulated by a finely tuned set of controls involving dozens of different cell types, proteins, carbohydrates and lipids. Most of the time, the immune system hums along happily but, on occasion, a control circuit is broken and one cell type starts to replicate out of control – this is leukaemia. Retaking control of the errant part of the system is the goal of Dr Weinkove’s immunotherapeutic approach.

One treatment that has being investigated is to harvest immune cells called dendritic cells from the patient and stimulate them in the test tube to fight the leukaemia cells. The cells are then injected back into the patient. However, this has not worked well in people with CLL. Dr Weinkove believes the key to success is to introduce another cell into the test tube to further stimulate the dendritic cells. This cell goes by the name of invariant natural killer T cell or iNKT cell. These cells are not plentiful in the blood and much work is required to isolate and learn how to work with them, but in two or three years an effective new treatment for CLL may be available.

Dr Weinkove says, “Although the scientific community in New Zealand is relatively small, this does have advantages – it’s easier to get to know the main players. There is tremendous willingness to cooperate on the part of other laboratories and organisations and, critically for my work, a great deal of enthusiasm from study volunteers!”